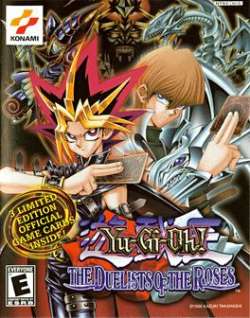 Yu-Gi-Oh! The Duelists of the Roses

Yu-Gi-Oh! The Duelist of the Roses is a video game based on the Yu-Gi-Oh! series. This is the first game from the series to be released on PlayStation 2 format. The video game has loosely been based on the real-world Wars of the Roses. Yami Yugi (Yugi Mutou in the English anime and the original Japanese adaptations) could assume the identity of the head of the Tudor dynasty, Henry Tudor, while Seto Kaiba would represent the head of the Yorkist clan force as Christian Rosenkreuz.