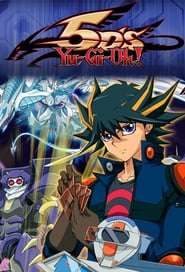 Yu-Gi-Oh! 5DS is an anime series and the third installment in the franchise of Yu-Gi-Oh! anime series. It aired in Japan between April 2, 2008 and March 30, 2011, following the conclusion of the previous series, Yu-Gi-Oh! GX. In America, most episodes of Yu-Gi-Oh! 5D's were dubbed by 4Kids Entertainment. Yu-Gi-Oh! 5D's was succeeded by Yu-Gi-Oh! Zexal. Much like the previous series, it focuses around characters playing a card game Duel Monsters, despite the fact the 'Duel Monsters' tagline has been dropped from the Japanese title. This series introduces new types of cards such as Synchro Monsters, that are reflected in the Official Trading Card Game. During the series, in addition to regular duels using Duel Disks, a new type of Duel Disk, motorcycle-like vehicles, called "D-Wheels" are used, and the duelists engage in games called "Riding Duels". The show is set in the distant future, where the upper class population live in New Domino City and the lower class in a remote island where Domino's sewage is transported, Satellite. Yusei Fudo, the 18 year-old main protagonist, lives in Satellite and makes it his objective to reach his rival Jack Atlas, who lives in Domino. The series focuses on the five Signers, people embodied with a mark of one of the legendary Five Dragons, of which Yusei and Jack are two, and their conflict with the main antagonists Dark Signers and the Three Emperors of Yilaster.