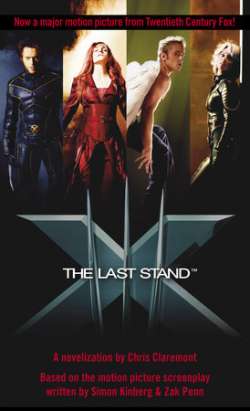 The world has acquired a lethal new weapon against X-gene mutants, whose superhuman powers separate them—for better, for worse, forever—from ordinary mortals. Now, for the first time, mutants have a choice: retain their godlike abilities, though their powers may isolate and alienate them, or surrender them and become human. The mutant antibody is called a cure, but its invention may trigger a struggle that destroys every living soul on Earth. As Magneto declares all-out war against humanity and its dreaded cure, the U.S. president mobilizes the military. But it is Charles Xavier and the X-Men who truly must brace for the ultimate battle, for they alone are powerful enough to determine the outcome. Lessons of the past are useless in the coming life-and-death conflict, as new players—mutants possessing unprecedented, unearthly skills— take center stage. With so many joining forces with Magneto's evil Brotherhood, the X-Men will face their ultimate test against an enemy whose forces far outnumber their own. Now, as the world trembles, the Phoenix slowly rises. . .