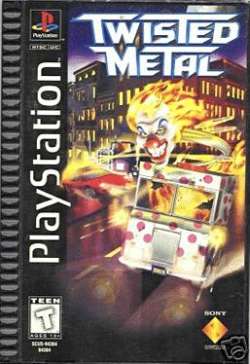 Twisted Metal consists of a series of arena-based battles against an increasing number of opponents in increasingly large arenas. These battles culminate in a face-off with the winner of the previous year's competition, Darkside, who drives a large armored car which fires multiple missiles at once. Players can choose one of 12 different vehicles with which to enter combat. Each vehicle has a distinct driver and special move. The controls consist of accelerator, brake, "tight turn" (essentially a handbrake) and turbo on the face buttons, with main weapons and machine gun selection and control on the shoulder buttons. Arenas are populated with weapon pickups to re-supply missile stocks, repair stations for repairing damage to your car, pedestrians, and course stewards armed with either machine guns or missile launchers.