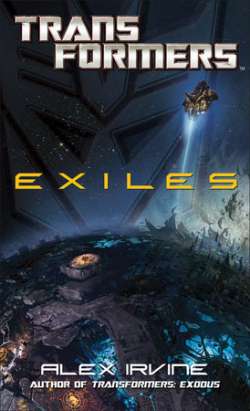 The epic battles between Optimus Prime and Megatron have long thrilled Transformers fans. But these two giants weren’t always great leaders and bitter foes. This new novel continues the electrifying saga that started with Transformers: Exodus, unveiling the origins of the conflict—the explosive events that unfolded before Optimus and Megatron arrived Earthside, forever altering the destiny of their kind.

Once allies, Optimus and Megatron are now enemies in a civil war. To prevent Cybertron from falling into Megatron’s hands, Optimus jettisons the planet’s heart, the AllSpark, into space, then sets out to find it with Megatron hot on his heels. Optimus is determined to defeat Megatron, bring the AllSpark home, and restore Cybertron to its former glory.

But a saboteur lurks aboard Optimus’s spaceship, and ahead lie lost colonies, some of them hostile. Optimus needs help of the highest caliber, but from whom? Heroes such as Solus, Nexus, and Vector Prime are just names from make-believe stories of long ago. Or are they? Maybe it’s time for Optimus Prime to find out. Maybe it’s the only chance he has to vanquish mighty Megatron.