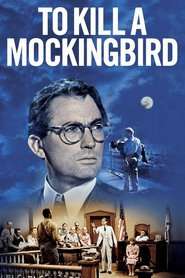 To Kill a Mockingbird

In a small Alabama town in the 1930s, scrupulously honest and highly respected lawyer, Atticus Finch puts his career on the line when he agrees to represent Tom Robinson, a black man accused of rape. The trial and the events surrounding it are seen through the eyes of Finch's six-year-old daughter, Scout. While Robinson's trial gives the movie its momentum, there are plenty of anecdotal occurrences before and after the court date: Scout's ever-strengthening bond with older brother, Jem, her friendship with precocious young Dill Harris, her father's no-nonsense reactions to such life-and-death crises as a rampaging mad dog, and especially Scout's reactions to, and relationship with, Boo Radley, the reclusive 'village idiot' who turns out to be her salvation when she is attacked by a venomous bigot.

How To Watch To Kill a Mockingbird