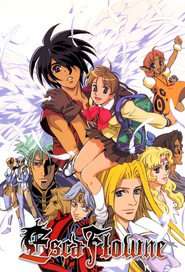 The Vision of Escaflowne

The Vision of Escaflowne follows a teenage high school girl named Hitomi, who finds herself pulled from Earth to the planet Gaea when a boy named Van appears on the high school track while battling a dragon. In Gaea, she is caught in the middle of a war as the Zaibach Empire attempts to take over Gaea. Van, with aid from Allen, commands his mystical mech Escaflowne in the struggle to stop the Zaibach Empire. Hitomi's fortune telling powers blossom in Gaea as she becomes the key to awakening Escaflowne and to stopping Zaibach's plans.

How To Watch The Vision of Escaflowne