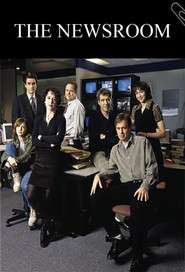 The Newsroom is a Canadian television comedy-drama series which ran on CBC Television in the 1996–97, 2003–04 and 2004–05 seasons. A two-hour television movie, Escape from the Newsroom, was broadcast in 2002. The show is set in the newsroom of a television station which is never officially named, but is generally understood to be based on the CBC itself. Inspired by American series The Larry Sanders Show and similar to such earlier series as the British Drop the Dead Donkey and the Australian Frontline, the series mined a dark vein of comedy from the political machinations and the sheer incompetence of the people involved in producing City Hour, the station's nightly newscast. Although not originally intended as an ongoing series, the initial run of 13 episodes led The Newsroom to become one of the most critically acclaimed programs on Canadian television in the 1990s. Following the end of The Newsroom, Finkleman produced three different short-run series for the CBC, More Tears, Foolish Heart and Foreign Objects, all of which included Findlay as a linking character.