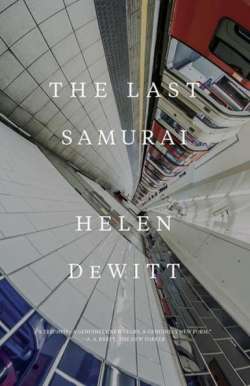 Called “remarkable” (The Wall Street Journal) and “an ambitious, colossal debut novel” (Publishers Weekly), Helen DeWitt’s The Last Samurai is back in print at last Helen DeWitt’s 2000 debut, The Last Samurai, was “destined to become a cult classic” (Miramax). The enterprising publisher sold the rights in twenty countries, so “Why not just, ‘destined to become a classic?’” (Garth Risk Hallberg) And why must cultists tell the uninitiated it has nothing to do with Tom Cruise? Sibylla, an American-at-Oxford turned loose on London, finds herself trapped as a single mother after a misguided one-night stand. High-minded principles of child-rearing work disastrously well. J. S. Mill (taught Greek at three) and Yo Yo Ma (Bach at two) claimed the methods would work with any child; when these succeed with the boy Ludo, he causes havoc at school and is home again in a month. (Is he a prodigy, a genius? Readers looking over Ludo’s shoulder find themselves easily reading Greek and more.) Lacking male role models for a fatherless boy, Sibylla turns to endless replays of Kurosawa’s masterpiece Seven Samurai. But Ludo is obsessed with the one thing he wants and doesn’t know: his father’s name. At eleven, inspired by his own take on the classic film, he sets out on a secret quest for the father he never knew. He’ll be punched, sliced, and threatened with retribution. He may not live to see twelve. Or he may find a real samurai and save a mother who thinks boredom a fate worse than death.