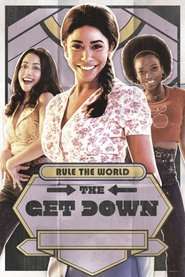 In New York City in the late 1970's, Grandmaster Flash has taken Shaolin under his wing and promises to show him the secrets of hip-hop, including the "get down," the section of a song with the most infectious beat. Shaolin can spin records, but he doesn't have the words to accompany the music. When he meets Zeke Figuero, a younger kid also from the Bronx, he knows he's found his wordsmith. But can the Get Down Brothers rise to the top?

How To Watch The Get Down