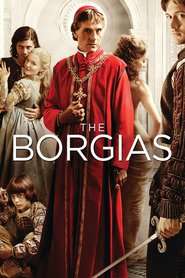 The Borgias is a British television drama serial produced by the BBC in 1981, in association with the Second Network of the Italian RAI. A historical series, The Borgias was set in Italy during the 15th century and told the story of Rodrigo Borgia – the future Pope Alexander VI – and his family, including his son Cesare and daughter Lucrezia. What was intended to be a gripping historical melodrama in the same vein as the earlier BBC series, I, Claudius, despite locations and excellent cinemaphotography was not a critical success. The BBC screened the series at the same time as ITV's lavish Brideshead Revisited with critics contrasting the high production values and stellar cast of Brideshead with The Borgias' seemingly focused on the frequent graphic violence and nudity. The Sicilian-born actor Adolfo Celi, well known to have a heavy Sicilian accent, is said to have had much difficulty enunciating his lines, although his thickly-accented English gave the series a credible air. Its producer was Mark Shivas. The 10 episodes follow events from 1492 when Rodrigo is elected pope and concludes in 1507 with Cesare's violent death.