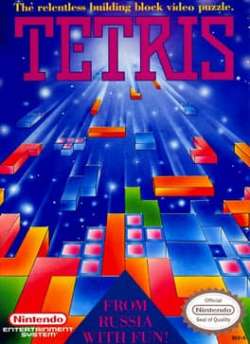 Tetris is an electronic puzzle game that was created by Alexey Pajitnov in 1984, while working in the USSR as a computer programmer. Pajitnov often programmed games to test new equipment using simple tasks, and in his spare time, developed a computer game inspired by his favorite puzzle board game Pentominos. The objective of Pentominos was to fit 12 different geometric-shaped pieces formed out of five squares into a box. Pajitnov's vision was to create an electronic game where players arranged puzzle pieces in real time by having them ?fall? faster and faster from the top of the screen. Pajitnov designed the game using seven distinctive playing pieces made from four squares. He called it Tetris, after 'tetra,? the Greek word for four, and tennis, his favorite sport. After giving the game to his colleagues, it became an instant, hugely addictive hit, and shortly thereafter spread like wildfire throughout the Soviet Bloc's computer literate. His subsequent friendship with game designer, Henk Rogers, now Blue Planet Software Chairman and Managing Director of The Tetris Company, brought the Tetris game out of the Soviet Union to become one of the most widely played electronic games of all time.