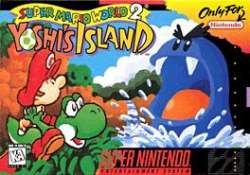 Super Mario World 2: Yoshi's Island casts players as Yoshi as he escorts Baby Mario through 48 levels in order to reunite him with his brother Luigi, who had been kidnapped by Baby Bowser's minions. As a Super Mario series platformer, Yoshi runs and jumps to reach the end of the level while solving puzzles and collecting items.