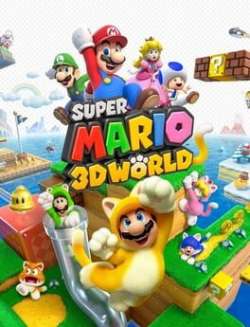 Leap into the first multiplayer Mario platformer set in a 3D world. Play as Mario, Luigi, Princess Peach, and Toad—each with their own special skills—in the Sprixie Kingdom. Scamper up walls with the new cat power-up to find secrets or pounce from above to claw enemies. Enjoy a solo romp or add friends on the fly for instant Mario multiplayer magic. Freely roam the world map and each sprawling stage alone or team up with friends to find hidden stars while competing to take the crown for most coins and points found. Tap the Wii U GamePad controller's touch screen to freeze enemies and reveal invisible secrets. Or, use the GamePad for off-TV play while tilting it to spot hidden nooks and crannies with the moveable camera. All this and more makes Mario's world deeper than ever. Jump on in!