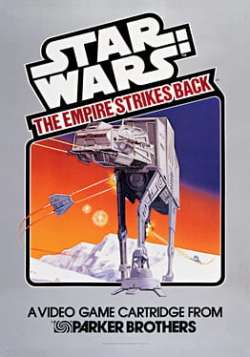 Star Wars: The Empire Strikes Back

From Wikipedia: "Star Wars: The Empire Strikes Back is a video game released for the Nintendo Entertainment System in 1992. It is the sequel the original Star Wars for the NES. This is the second of three video games released under the Empire Strikes Back title for home video game systems. It was preceded by a version for the Atari 2600 and succeeded by Super Star Wars: The Empire Strikes Back for the SNES. The NES version was released the same year as JVC's Super Star Wars for the Super Nintendo Entertainment System. As Empire was released towards the end of the NES's lifecycle, a corresponding sequel to the film Return of the Jedi was never developed, nor released. A version of the game was released for the Game Boy. That product was reprinted and distributed by several publishers over the course of three years."