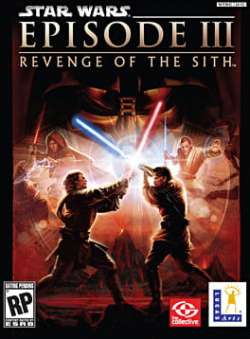 Third-person action/adventure game, Star Wars: Episode III, delivers the ultimate Jedi action experience as Anakin Skywalker and Obi-Wan Kenobi join forces in fierce battles and heroic lightsaber duels until one's lust for power and the other's devotion to duty leads to a final confrontation between good and evil. In Star Wars: Episode III, players control all the Jedi abilities of both Anakin Skywalker and Obi-Wan Kenobi, including devastating Force powers and advanced lightsaber techniques involving robust combo attacks and defensive maneuvers. As Anakin, unleash the power of the dark side in ruthless lightsaber and Force attacks. As Obi-Wan, struggle to save the galaxy from darkness by focusing the power of the light side into swift and precise lightsaber attacks and using the Force to control enemy actions.