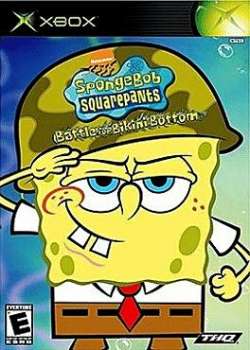 Players control SpongeBob, Patrick and Sandy. In the PC version you can play as SpongeBob in various parts of Bikini Bottom. Players also battle robot bosses such as Sandy, Plankton, Squidward, Patrick, and SpongeBob—switching between characters at bus stops throughout the game. Core gameplay involves collecting items and defeating the robots which have attacked Bikini Bottom, whilst crossing platforms and avoiding environmental hazards like spikes and flames. A number of mini-games are also accessible throughout the game, like Whack-A-Tiki, The Rolling Ball, Ske-Ball, The Funnel Machines, or Cruise Bubble Challenge.