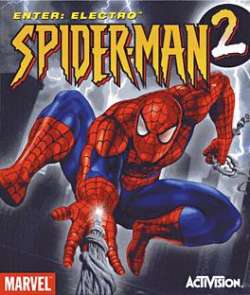 Spider-Man 2: Enter Electro is an action-adventure video game developed by Vicarious Visions and published by Activision for the PlayStation in 2001. It is the sequel to Neversoft's Spider-Man title, which was released the previous year. The game follows Spider-Man as he attempts to stop another old nemesis Electro from obtaining a source of power known as the Bio-Nexus Device. Game bosses include Shocker, Hammerhead, Lizard, Sandman and the exclusive charged-up Hyper-Electro.