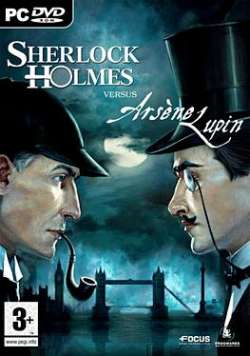 This new Sherlock Holmes game sends us to 19th Century London where Arséne Lupin, a young French burglar with an impressive track record, has just challenged Scotland Yard and the most famous of detectives - Sherlock Holmes. This new adventure offers gamers tremendous freedom and an even stronger sense of involvement through real-time 3D. The game invites you to visit 19th century London in all its splendor and to travel through superb decors which have been faithfully reproduced. The magnificent city of London with all its most famous monuments (Buckingham Palace, the British Museum, the National Gallery, the Tower of London...), is faithfully created for the scenes of investigation. Meet the Queen of England in a very private interview. Interact with more than 40 characters to further your inquiry. Take turns being the famous detective, Sherlock Holmes, and his faithful friend, Doctor Watson. Use and combine more than 100 objects and discover hundreds of clues and documents to help you bring the investigation to its conclusion.