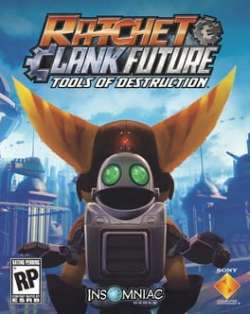 Ratchet & Clank Future: Tools of Destruction (known as Ratchet & Clank: Tools of Destruction in most PAL countries) is a 2007 platformer video game developed by Insomniac Games and published by Sony Computer Entertainment for the PlayStation 3. The game was released on October 23, 2007 in North America and on November 9, 2007 in Europe. It is the first PlayStation 3 installment for the Ratchet & Clank franchise, as well as the first installment for the "Future" series. It was also one of the first PlayStation 3 games to support DualShock 3 rumble straight from the disc. Ratchet & Clank Future: Tools of Destruction was met with critical acclaim upon release. Most positive comments concerned the "engaging" and "fun" gameplay, while ost criticism was aimed at the game's technical issues. The game was nominated for several awards from gaming publications and was considered a commercial success.