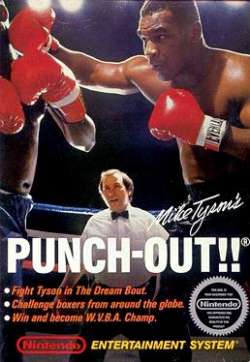 Punch-Out!!, originally released in North America as Mike Tyson's Punch-Out!!, is a boxing sports fighting video game for the Nintendo Entertainment System. Punch-Out!! features a boxer known as Little Mac working his way up the professional boxing circuits, facing a series of colorful, fictional boxers, leading to a final fight with real-life boxer, the then-World Heavyweight Champion, which is Mike Tyson in the original version and Mr. Dream in the later version. Little Mac has a limited repertoire compared to most of his opponents. His punches are limited to left and right jabs, left and right body blows, and a powerful uppercut. The uppercut can only be used once the player earns a star, which is typically accomplished by counter-punching the opponent directly before or after certain attacks are launched. The player can acquire up to three stars. To perform the uppercut, the player needs to press the start button once a star is earned. To defend, Mac can dodge left or right, duck, and block punches by putting up his guard. Little Mac also has a heart meter, which decreases by three upon being struck by an opponent and one upon blocking an attack or an opponent blocking/dodging the player's attack.