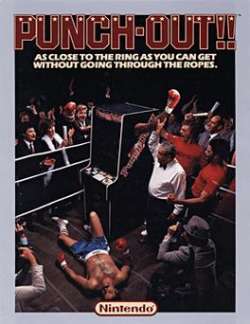 Punch-Out!! is a boxing arcade game by Nintendo, released 1984. It was the first in a series of successful Punch-Out!! games that produced an arcade sequel known as Super Punch-Out!!, a spin-off of the series titled Arm Wrestling, a highly popular version for the NES originally known as Mike Tyson's Punch-Out!!, and Super Punch-Out!! for the SNES. The arcade game introduced recurring video games characters such as Glass Joe, Piston Hurricane, Bald Bull, and Mr. Sandman. It is also notable to be the debut project for Koji Kondo, who would later go on to write the acclaimed music for the Super Mario and The Legend of Zelda series.