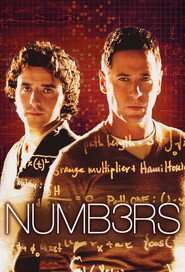 Numbers is an American crime drama television series that ran on CBS from January 23, 2005 to March 12, 2010. The series was created by Nicolas Falacci and Cheryl Heuton, and follows FBI Special Agent Don Eppes and his mathematical genius brother Charlie Eppes who helps Don solve crimes for the FBI. Brothers Ridley and Tony Scott produced Numb3rs; its production companies are the Scott brothers' Scott Free Productions, CBS Television Studios. The show focuses equally on the relationships among Don Eppes, his brother Charlie Eppes, and their father, Alan Eppes, and on the brothers' efforts to fight crime, normally in Los Angeles. A typical episode begins with a crime, which is subsequently investigated by a team of FBI agents led by Don and mathematically modeled by Charlie, with the help of Larry Fleinhardt and Amita Ramanujan. The insights provided by Charlie's mathematics were always in some way crucial to solving the crime. The series was the most popular show airing on Friday evenings throughout its first four seasons. In May 2010, CBS announced that Numb3rs had been canceled after six seasons.