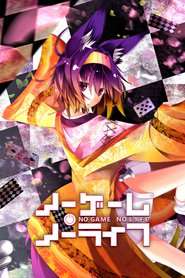 No Game, No Life

Genius gamer siblings Sora and Shiro are so good they are considered as urban legend. One day, a young boy named Teto appears before them, claiming to be the God of another dimension where Sora and Shiro are summoned to, in which no violence is allowed and everything is decided by a game. Of the 16 different races residing in this world, Humanity is the weakest. After having the vast majority of their lands captured by the other races and being driven to the brink of extinction, Sora and Shiro challenge these one-of-a-kind battles of the intellectual powers in order to save Humanity.

How To Watch No Game, No Life