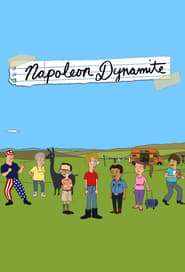 Napoleon Dynamite is an American animated sitcom based on the 2004 cult film of the same name. The series was created by Jared and Jerusha Hess and developed by the Hesses and Mike Scully. The series follows the adventures of Napoleon Dynamite in the small town of Preston, Idaho. The Hesses came up with the idea for the series after filming Napoleon Dynamite. It originally ran on Fox from January 15, 2012, to March 4, 2012, before being cancelled.

How To Watch Napoleon Dynamite