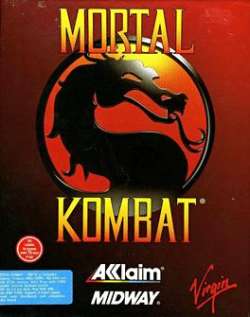 Mortal Kombat is a side-scrolling fighting game. Fighting is set as one-on-one combat, allowing each player to perform a variety of punches, kicks, and special moves in order to defeat their opponent. When the opponent faces their second round loss, the winner can perform a finishing move called a "Fatality" on the loser. The Fatality is a move unique to each fighter that graphically kills the loser in a blood-soaked finale.