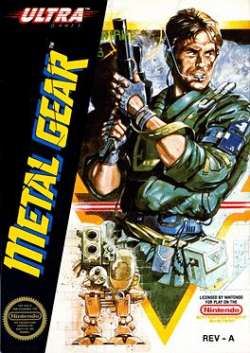 Metal Gear revolves around a special forces operative codenamed Solid Snake who goes into a solo infiltration mission into the fortified state of Outer Heaven to destroy Metal Gear, a bipedal walking tank capable of launching nuclear missiles from anywhere in the world. The player must navigate the main character, a military operative codenamed Solid Snake, through various locations, while avoiding visual contact and direct confrontation with patrolling guards. If the player is seen, the game enters the "Alert Mode." In this situation, Snake must escape from enemy's sight in order to resume infiltration. The player starts the game unarmed, but eventually acquires firearms such as a Beretta 92F and an M79 grenade launcher, as well as explosives such as remote control missiles and landmines. Weapons can not only be used to kill enemies, but also to clear obstacles such as hollow walls and electrified floors. Snake can also use his fists to punch and defeat patrolling enemies. Occasionally, if the player defeats a guard with punches without alerting anyone, the defeated guard will yield a single unit of rations or an ammo box that can be picked up. In addition to enemy guards, the player will also be confronted by mercenaries who will challenge the player to combat, serving as the boss characters.