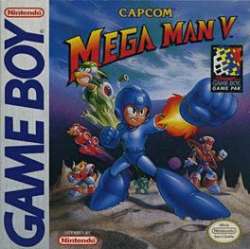 Mega Man V, known as Rockman World 5, is a video game developed and published by Capcom for the Game Boy handheld game console. It is the fifth and final game in the Game Boy version of the original Mega Man series. The game follows the adventures of the protagonist Mega Man as he must defend the Earth from a group of powerful robots from outer space called the "Stardroids". Mega Man V was also unique from the previous Game Boy Mega Man games as it features original and unique bosses rather than recycling those from the original Nintendo Entertainment System (NES) Mega Man games.