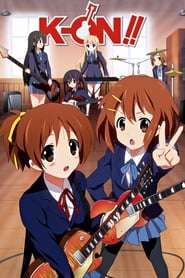 Rock n' Roll may never die, but the Sakuragoaka Girl's High School Light Music Club might not be here to stay unless would-be drummer Ritsu Tainaka can find three more members to replace the graduated seniors. Determined to see that the beat goes on, Ritsu can get a little help from her friend Mio Akiyama on bass, and together they might be able to convince choir-inclined Tsumugi Kotobuki to join on the keyboards. But even then, they'll still need a hero, preferably of the juke-box variety with stars in her eyes. Instead they find Yui Hirasawa, who's looking for a club to join and who's never held a guitar in her life. But when Yui does pick up a beat-up six-string, it feels good in her hands, and it doesn't take long to understand that maybe she's finally found a place where she belongs. Because you can't stop the music when four girls share a dream, even if it's something as crazy as someday playing at the famous Budokan. It's going to be a long and winding road, but if they find their passion and follow their muse, they could go anywhere in K-ON!