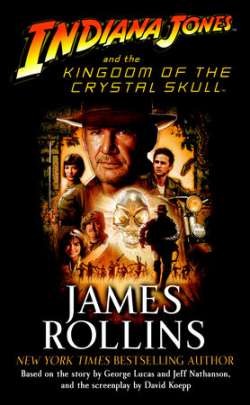 Indiana Jones and the Kingdom of the Crystal Skull (TM)

Everyone’s favorite globe-trotting, wisecracking archaeologist is hurtling headfirst into high adventure and relying on his wits, his fists, and his trusty bullwhip to get him out of deep trouble.

It’s 1957, and the Cold War is heating up. A ruthless squad of Russian soldiers crashes Indiana Jones’s latest expedition and forces the unwilling Indy along as they brazenly invade American soil, massacre U.S. soldiers, and plunder a top-secret government warehouse. Commanded by a sword-wielding colonel who’s as sinister as she is stunning, the menacing Reds have one objective: a relic even more precious–and powerful–than the mythic Ark of the Covenant, capable of unlocking secrets beyond human comprehension.

Quick thinking and some high-speed maneuvers help Indy narrowly escape certain death. But the Russians are unrelenting, and their next move leads Indy into the depths of the Amazon on a desperate rescue mission. With a hotheaded teenage biker as his unlikely wing man and his vengeful new Russian nemesis waiting for a rematch, Indy’s back in the game–playing for a prize all the wonders of the world could never rival.