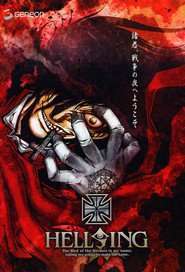 Hellsing tells the story of Integra, a vampire hunter who is defending England and its people from an invasion of undead Nazis. And robo-vampires. And Catholic super-priests. It's World War III, and Integra's right in the middle of it. Hellsing is the organization that's best equipped to deal with these threats, and the Queen and her government are depending on Integra to keep the country safe.