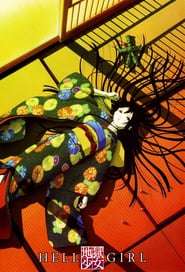 Hell Girl, also known as Jigoku Shōjo: Girl from Hell, is an anime series produced by Aniplex and Studio Deen. It focuses on the existence of a supernatural system that allows people to take revenge by having other people sent to Hell via the services of the mysterious titular character and her assistants who implement this system. Revenge, injustice, hatred, and the nature of human emotions are common themes throughout the series. It premiered across Japan on numerous television stations, including Animax, Tokyo MX, MBS and others, between October 4, 2005 and April 4, 2006. Following the success of the first season, the series was followed soon after into a second, Jigoku Shōjo Futakomori, which premiered October 7, 2006 across Japan on Animax. A live-action television series adaptation started airing in Japan on Nippon Television from November 4, 2006. A third season of the anime, further continuing the series, was first announced on the mobile version of the series' official website Jigoku Tsūshin. The official title of the third season was announced to be Jigoku Shōjo Mitsuganae. and began airing on Japanese TV October 4, 2008.