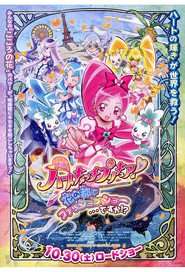 HeartCatch PreCure! or HeartCatch Pretty Cure! is a Japanese anime series and the seventh Pretty Cure installment by Izumi Todo. Produced by Toei Animation, the series is directed by Tatsuya Nagamine, who directed Beet the Vandel Buster and written by Takashi Yamada, the main writer of the Omajo DoReMi series. Official character designs were done by Yoshihiko Umakoshi, who did the character designs for Guyver: The Bioboosted Armor, Casshern Sins, and Marmalade Boy. The series premiered on February 7, 2010 on TV Asahi's ANN network, following Fresh Pretty Cure!, and ended on January 30, 2011, where it was followed by Suite PreCure. The series has two main motifs. One is fashion, which is referenced to Tsubomi joining the fashion club, which is part of the storyline. And second is flowers, which are prominent in the naming of numerous characters and items, as well as in the main storyline. Additionally, most episodes contain at least one reference to the language of flowers. HeartCatch PreCure! was selected anime series of the year in the December 2010 issue of British magazine Impact.