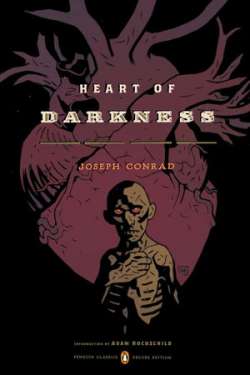 In a novella which remains highly controversial to this day, Conrad explores the relations between Africa and Europe. On the surface, this is a horrifying tale of colonial exploitation. The narrator, Marlowe journeys on business deep into the heart of Africa. But there he encounters Kurtz, an idealist apparently crazed and depraved by his power over the natives, and the meeting prompts Marlowe to reflect on the darkness at the heart of all men. This short but complex and often ambiguous story, which has been the basis of several films and plays, continues to provoke interpretation and discussion.

Heart of Darkness grew out of a journey Joseph Conrad took up the Congo River; the verisimilitude that the great novelist thereby brought to his most famous tale everywhere enhances its dense and shattering power.

Apparently a sailor’s yarn, it is in fact a grim parody of the adventure story, in which the narrator, Marlow, travels deep into the heart of the Congo where he encounters the crazed idealist Kurtz and discovers that the relative values of the civilized and the primitive are not what they seem. Heart of Darkness is a model of economic storytelling, an indictment of the inner and outer turmoil caused by the European imperial misadventure, and a piercing account of the fragility of the human soul.