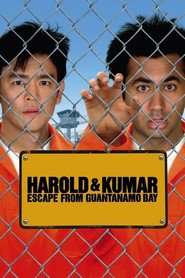 Having satisfied their urge for White Castle, Harold and Kumar jump on a plane to catch up with Harold's love interest, who's headed for the Netherlands. But the pair must change their plans when Kumar is accused of being a terrorist. Rob Corddry also stars in this wild comedy sequel that follows the hapless stoners' misadventures as they try to avoid being captured by the Department of Homeland Security.

How To Watch Harold & Kumar Escape from Guantanamo Bay