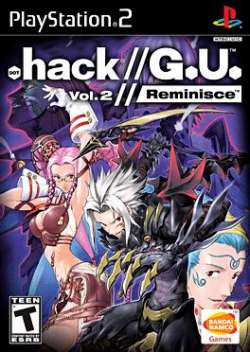 .hack//G.U. Vol. 2: Reminisce is the second entry in the .hack//G.U. series containing: Vol. 1: Rebirth, .hack//G.U. Vol. 2: Reminisce and .hack//G.U. Vol. 3: Redemption. As in the previous .hack games, .hack//G.U. simulates a massively multiplayer online role-playing game as the player controls a character who starts playing it. Players assume the role of a participant in a fictional game called The World. While in The World, the player controls the on-screen player character, Haseo, from a third-person person perspective (with optional first-person mode). The player may control the camera using the game controller's right analog stick. Within the fictional game, players explore monster-infested fields and dungeons as well as "Root Towns" that are free of combat. They also can "log-off" from the game and return to a computer desktop interface which includes in-game e-mail, news, and message boards, as well as desktop and background music customization options. In Reminisce, an optional card game called "Crimson VS" becomes available. The player may save the game to a memory card both from the desktop and within The World at a Save Shop. After the player completes the game, a Data Flag appears on the save file, which allows the transfer of all aspects of the player character and party members to the next game in the series. This can also be applied to previous games if the player first finished the Reminsce or Redemption. Players can attack monsters in real time. However, the action pauses whenever the menu is opened in order to select magic to cast, items to use, or skills to perform. The player only directly controls Haseo, while the other characters are controlled by artificial intelligence. The player may either provide guidelines ("Free Will", "Rage", "Life", etc.) or issue direct commands (for example, to cast a particular magic at a particular enemy) to the computer-controlled characters. Monsters roam the environments freely or guard treasure chests. Once combat is initiated, via a "surprise attack" or the player being spotted, a wall erects around the combat area to prevent escape. Weapons give the player access to the Skill Trigger feature which allows them to perform a powerful attack at the cost of losing SPs. As an adept rogue character, Haseo can wield multiple weapons for close combat. Although Haseo can only use one weapon per battle, during Reminisce the player can change weapons in the middle of Skill Triggers. Under certain conditions, the player may execute an enhanced type of Skill Trigger called "Rengeki". These attacks deal greater damage and fill a Morale gauge, which allows the player and his team members to use a combination attack. Certain plot-related fights, called "Avatar battles", use a different interface which incorporates shoot 'em up gameplay elements. After depleting the opponent's health, players must charge up a "Data Drain" to end the battle. Root Towns are non-combat areas in The World. The player may restock on items, buy equipment, or chat and trade with other "players" of The World. The player may also undertake optional quests and visit guilds. A key feature of all towns is the Chaos Gate. This blue portal is used to travel between towns (called "servers") as well as access the fields and dungeons where battles take place. A password system controls the characteristics of each area. Depending on the characteristics of each word in the three word phrase, the resulting area may have different attributes such as prevalence of monsters or items, among other features.