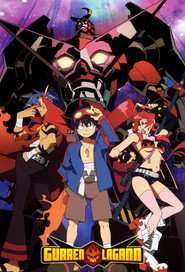 In the distant future, people build their homes and raise domestic animals in subterranean caverns. As a result, they live in fear of the occasional earthquake and cave-in, and have been for hundreds of years. Jeeha is one such village. One day, a boy named Simon happens to find a small, shiny drill whilst digging to expand the village. At the same time, Kamina, a guy who believes that there is another land above the village, persuades a gangster to break through the ceiling in order to leave the cavern. Suddenly, an earthquake occurs and the ceiling collapses, followed by a big robot breaking through the ceiling. Kamina is now sure that there is a world above them. Recklessly, he begins to fight against the robot. At that moment, another person appears from the land above. It is a girl by the name of Yoko. With a rifle in hand, she had been tracking the robot. However, all she could do was distract it. Then, Simon shows what he had found to Kamina and Yoko. It`s a mysterious robot whose head is also its body.

How To Watch Gurren Lagann