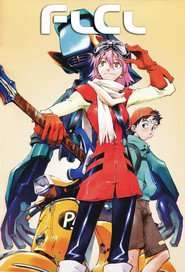 FLCL is an original video animation series written by Yōji Enokido, directed by Kazuya Tsurumaki and produced by the FLCL Production Committee, which included Gainax, Production I.G, and Starchild Records. FLCL follows Naota Nandaba, a twelve-year-old boy living in the fictional Japanese suburb of Mabase, and his interactions with Haruko Haruhara, who arrives in the quiet suburb, drawn by the industrial town houses and the Medical Mechanica building. The English adaptation of the series was first licensed by Synch-Point which released the DVDs and soundtrack, but these went out of print in 2006. In January 2010, Funimation Entertainment announced that they would be re-releasing the series on DVD and releasing it for the first time on Blu-ray. The series aired in America on Cartoon Network's Adult Swim several times and is now set to air on the channel's Toonami block from October 26th, 2013, and aired in Canada on G4techTV Canada's Anime Current block. The series is also available via Hulu, iTunes, and on FUNimation's website.