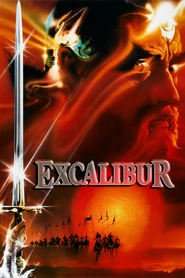 The myth of King Arthur brought to the screen. Uthur Pendragon is given the mystical sword Excalibur by Merlyn. At his death Uthur buries the sword into a stone, and the next man that can pull it out will be King of England. Years later Arthur, Uthur's bastard son draws Excalibur and becomes king. Arthur's evil half-sister Morgana sires a son with him, who may prove his downfall.

How To Watch Excalibur