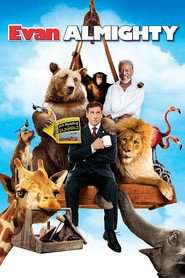 Buffalo newsman Evan Baxter is elected to Congress with the slogan, "Change the world." He lucks into a huge house in a new Virginia suburb. His Capitol office is also fantastic, but there's a catch: he's tapped by the powerful Congressman Long to co-sponsor a bill to allow development in national parks. In steps God, who appears to a disbelieving Evan and gently commands him to build an ark

How To Watch Evan Almighty