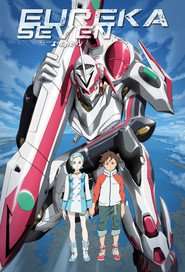 Eureka Seven, known in Japan as Psalms of Planets Eureka seveN, is a Japanese mecha anime TV series by Bones. Eureka Seven tells the story of Renton Thurston and the outlaw group Gekkostate, his relationship with the enigmatic mecha pilot Eureka, and the mystery of the Coralians. Bandai produced three video games based on Eureka Seven; two of them are based on events prior to the show, while the third is based on the first half of the show. Both the original concept of the anime and the video game Eureka Seven vol. 1: New Wave have been adapted into manga series as well, although with many significant changes primarily at the end. The TV series has also been adapted into a series of four novels and a movie.

How To Watch Eureka Seven