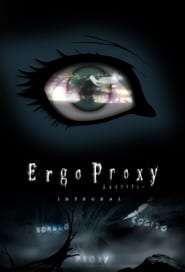 Ergo Proxy is a science fiction suspense anime television series, produced by Manglobe, which premiered across Japan on 25 February 2006 on the WOWOW satellite network. It is directed by Shukō Murase, with screenplay by Dai Satō et al.. Ergo Proxy has been described as a dark sciencefiction mystery with philosophical underpinnings. It features a combination of 2D digital cel animation, 3D computer modeling, and digital special effects.