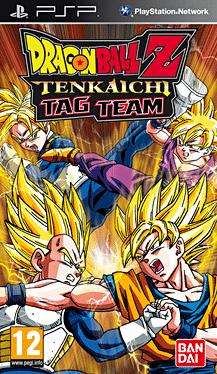 For the first time ever Dragon Ball Z fans can enter into high-impact two vs. two combat in Dragon Ball Z: Tenkaichi Tag Team for the PSP system. Play solo or team up via Ad Hoc mode to tackle memorable battles in a variety of single player and multiplayer modes, including Dragon Walker, Battle 100, and Survival Mode. Dragon Walker Mode takes fans through the entire epic Dragon Ball Z story arc from the Saiyan saga to the Majin Buu saga. Battle 100 Mode tasks players to relive the most epic encounters and newly created situations from the Dragon Ball Z world in ever increasingly difficult situations. With more than 70 playable and deeply customizable characters, multiple modes, and Ad Hoc Party gameplay, Dragon Ball Z: Tenkaichi Tag Team is chock full of gameplay for your portable PSP system.