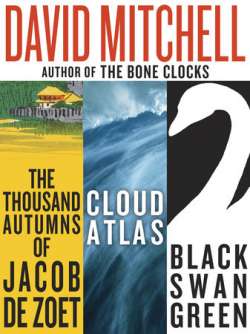 In one virtuosic, mind-bending novel after another, David Mitchell continues to strengthen his reputation as “one of the more fascinating and fearless writers alive” (Dave Eggers, The New York Times Book Review) and “the novelist who’s been showing us the future of fiction” (Ron Charles, The Washington Post). Now three of his acclaimed novels—Cloud Atlas, Black Swan Green, and The Thousand Autumns of Jacob de Zoet—are collected in one extraordinary eBook bundle.

Don’t miss The Bone Clocks, David Mitchell’s epic new novel about a fifteen-year-old English runaway who slams the door on her old life only to stumble into a supernatural war of good and evil on the margins of our world.

“Mitchell is, clearly, a genius. He writes as though at the helm of some perpetual dream machine.”—The New York Times Book Review

In 1850, an American notary voyaging from the Chatham Isles to his home in California is befriended by a physician who begins to treat him for a rare species of brain parasite. In 1931 Belgium, a disinherited bisexual composer contrives his way into the household of an infirm maestro with a beguiling wife and a nubile daughter. On the West Coast in the 1970s, a troubled reporter stumbles upon a web of corporate greed and murder. The narrative jumps onward to an inglorious present-day England; to a Korean superstate of the near future where neocapitalism has run amok; and, finally, to a postapocalyptic Iron Age Hawaii in the last days of history—then boomerangs back through centuries and space, revealing how these disparate characters connect and how their fates intertwine.

“As in the works of Thomas Pynchon and Herman Melville, one feels the roof of the narrative lifted off and oneself in thrall.”—Time

Thirteen-year-old Jason Taylor lives in the sleepiest, muddiest village in a dying Cold War England, 1982. But over the course of a single year, Jason discovers a world that is anything but sleepy: a world of Kissingeresque realpolitik enacted in boys’ games on a frozen lake; of “nightcreeping” through the summer backyards of strangers; of the cruel, luscious Dawn Madden and her power-hungry boyfriend; of a certain Madame Eva van Outryve de Crommelynck, an elderly bohemian emigré; of first cigarettes, first kisses, first Duran Duran LPs, and first deaths; of Margaret Thatcher’s recession; of Gypsies camping in the woods and the hysteria they inspire; and, even closer to home, of a slow-motion divorce in four seasons.

“Mitchell’s masterpiece; and also, I am convinced, a masterpiece of our time.”—Richard Eder, The Boston Globe

The year is 1799, the place Dejima in Nagasaki Harbor, the Japanese Empire’s single port and sole window onto the world, designed to keep the West at bay. To this place of devious merchants, deceitful interpreters, and costly courtesans comes Jacob de Zoet, a devout young clerk who has five years in the East to earn a fortune of sufficient size to win the hand of his wealthy fiancée back in Holland. But Jacob’s original intentions are eclipsed after a chance encounter with Orito Aibagawa, the disfigured midwife to the city’s powerful magistrate. The borders between propriety, profit, and pleasure blur until Jacob finds his vision clouded, one rash promise made and then fatefully broken—the consequences of which will extend beyond Jacob’s worst imaginings.