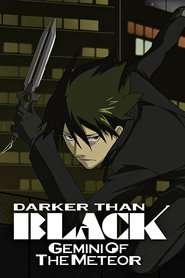 Darker than Black, known in Japan as Darker than Black: Kuro no Keiyakusha, is an anime television series created, directed and written by Tensai Okamura and animated by Bones. It premiered across Japan from April 5, 2007 on MBS, TBS, and its affiliated broadcast stations, with its satellite television premiere in Japan on Animax in May 2007. The music for the series is composed by Yoko Kanno. The series has also been adapted into two manga series, which are serialized in Monthly Asuka and in Young Gangan. The anime also was awarded Best Original Anime of The Year by GoGoplex, a popular magazine for teens. A sequel titled Darker than Black: Gemini of the Meteor premiered in Japan on October 8, 2009.