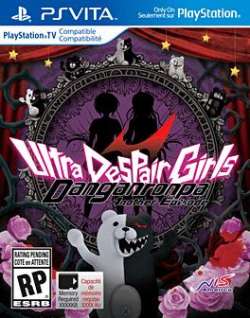 Danganronpa Another Episode: Ultra Despair Girls is a horror action adventure spin-off game in the Danganronpa series of visual novel games. Unlike the visual novel gameplay of the previous games, Ultra Despair Girls is a third-person adventure game with horror elements, in which players control Komaru Naegi as she tries to survive in a city overrun by Monokuma robots.