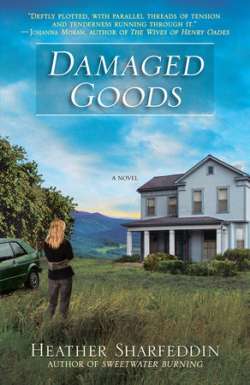 In this stirring new novel, Heather Sharfeddin reveals an unforgettable portrait of two people scarred by life and healed by each other.

Hershel Swift remembers nothing from the night of his accident, or the days leading up to it. Now, three months later, he’s back at work at his auction house, but the unsympathetic faces of his employees and customers tell the story of a man who has engendered much ill-will. Hershel can’t remember that man, or what he was doing on that dark road the night he crashed. But he senses sinister secrets waiting to destroy the better person he’s trying to become.

Silvie Thorne is on the run when her car breaks down in Oregon. When Hershel offers a hand, she has no choice but to grab it. She itches to keep moving, to lose the sheriff who must, by now, be after her—and the lockbox in her possession. Forced to stay put, Silvie shares with Hershel something of her own shattered past. But even as they struggle to put their lives back together, Silvie and Hershel are being thrust into the sights of a desperate and vicious man.

With lyrical, atmospheric prose, Heather Sharfeddin depicts ordinary people in the grip of mythic tragedy. This novel is every bit as electrifying as her acclaimed earlier works Sweetwater Burning and Windless Summer.