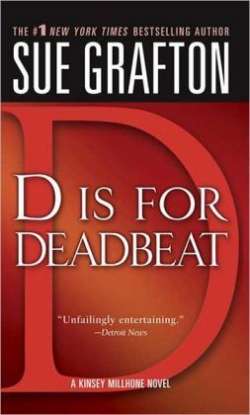 D is for Deadbeat

Sue Grafton's #1 New York Times bestselling series, reissued for a whole new generation of readers! D IS FOR DEADBEAT He called himself Alvin Limardo, and the job he had for Kinsey was cut-and-dried: locate a kid who'd done him a favor and pass on a check for $25,000. It was only later, after he'd stiffed her for her retainer, that Kinsey found out his name was Daggett. John Daggett. Ex-con. Inveterate liar. Chronic drunk. And dead. The cops called it an accident--death by drowning. Kinsey wasn't so sure. Pulled into the detritus of a dead man's life, Kinsey soon realizes that Daggett had an awful lot of enemies. There's the daughter who grew up with a cheating drunk for a father, and the wife who's become a religious nut in response to an intolerable marriage. There's the lady who thought she was Mrs. Daggett--and has the bruises to prove it--only to discover the legal Mrs. D. And there are the drug dealers out $25,000. But most of all, there are the families of the five people John Daggett killed, victims of his wild, drunken driving. The D.A. called it vehicular manslaughter and put him away for two years. The families called it murder and had very good reason to want John Daggett dead. Deft, cunning, and clever, this latest Millhone mystery also confronts some messy truths, for, as Kinsey herself says, "Some debts of the human soul are so enormous only life itself is sufficient forfeit"--but as she'd be the first to admit, murder is not a socially acceptable solution. "A" Is for Alibi "B" Is for Burglar "C" Is for Corpse "D" Is for Deadbeat "E" Is for Evidence "F" Is for Fugitive "G" Is for Gumshoe "H" Is for Homicide "I" Is for Innocent "J" Is for Judgment "K" Is for Killer "L" is for Lawless "M" Is for Malice "N" Is for Noose "O" Is for Outlaw "P" Is for Peril "Q" Is for Quarry "R" Is for Ricochet "S" Is for Silence "T" Is for Trespass "U" Is for Undertow "V" Is for Vengeance "W" Is for Wasted "X"