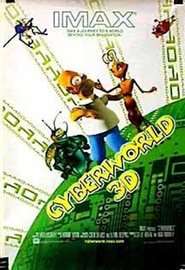 A collaboration of computer-animated films which features new characters and old friends from the award-winning Fox network television series, "The Simpsons" and Dreamworks' feature film "Antz" The saucy, synthetic hostess, Phig, takes the viewers through Cyberworld 3D, a futuristic gallery of wild adventure and spectacular images. Trouble arrives in the form of three unwelcomed guests named Buzzed, Wired and Frazzled who are inadvertently destroying the environment's foundation, forcing Phig into a hilarious battle to save herself and Cyberworld 3D from total annihilation!