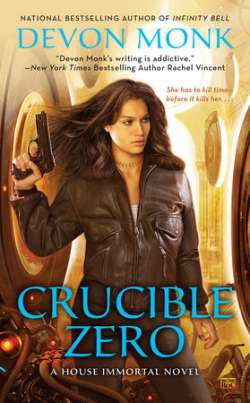 The national bestselling author of Infinity Bell returns to her “fresh and unique”* world where the truce between the ruling Houses has shattered and chaos now reigns. Only one woman has the power to save the world—but she could also destroy it. . . .

Matilda Case never thought of herself as a hero. But because she is galvanized—and nearly immortal in her stitched, endlessly healing body—she doesn’t have much of a choice. Even if she doesn’t want to save the world, she’s the only one capable of traveling in time to do so.

But her rescue attempt hasn’t gone as planned. She’s stuck in an alternate universe, and her world is in danger of disappearing. Worst of all, an unfathomably powerful man who can also travel through history doesn’t want her to put things to rights. He’s willing to wage bloody war to stop Matilda, unless she surrenders control of time to him.

Now, with the minutes ticking, Matilda must make impossible decisions, knowing that one wrong choice will destroy her—and any chance of saving everything she loves. . . .